In many parts of the world the process of farm size growth is ongoing. Mega-farms of up to 500,000 hectares appear in the countries of the former Soviet Union, Latin America, North America, Australia and even Central Europe. In the developing countries, an enormous farm size growth is often discussed in relation to the issue of land grabbing.

These changes in land cultivation patterns are often region-specific. Green Revolution fuelled land expansion in 1960s and 1970s in some parts of Asia and Africa while political and economic reforms in the 1990s were accompanied by the elimination of large and inefficient state farms in the collapsed Soviet Union. At the same time, the consequences of the expansion of agricultural land and the growth of average farm sizes are mixed. Some of them include inevitable large-scale destruction of natural ecosystems, loss of biodiversity, deforestation and environmental pollution followed by worse land fertility due to extensive cultivation methods but also accompanied by positive welfare effects due to achieved production growth.  Some of the examples, such as in Ukraine, Brazil and Argentina, demonstrate that mega-farms (also referred to as agroholdings in the post-Soviet countries) make a considerable contribution to the agricultural production outputs in those countries. In Ukraine, top 80 agroholdings operate on about 6 million hectares of land and produce up to 30% of the country’s gross crop output. In Brazilian cerrado, 38 corporate farms control 3.5 million hectares of land and produce 14 million tons of grains and oilseeds. In Argentina, the two largest agricultural companies manage about 2 million hectares of agricultural land.

An obvious question that arises in this context is: why do large farms evolve at all? Why do they (and do they) outperform small farms that are still considered by many researchers, policymakers and other stakeholders all over the world as the main mode of organization of agricultural production? Are there any “global”, common factors that drive large-scale farming organizations?

One of the major factors that can be considered in this regard is the abundance of land resources in some parts of the world. Coupled with favourable climatic conditions this factor contributes to the development of large scale farm units, for example, in Argentinian pampa, Brazilian cerrado, Southern Russia, Northern Kazakhstan, and Ukraine.

Another important driver of large-scale agricultural production is an improved access to outside capital. Large size farms attract investors that do not have experience in primary agriculture. In Latin America, the development of full-fledged land markets draws the investors’ attention to vast areas that can be adapted for agricultural production and further used for stock market operations. In this way, farming has become one of the major businesses of equity funds, investment banks and other types of investors there. In Russia, despite officially functioning land market, transaction costs are often so high that small-scale farms have troubles to grow extensively. Investments are initially aimed at large farming units associated with higher returns. On the contrary, the absence of a full-fledged land market is named among the major reasons for the establishment of large-scale farming units in Ukraine where accumulation of huge land areas is based on long-term land leases. Thus, agricultural policy reforms and legal frameworks should be also considered a substantial factor. Particularly in Russia, Ukraine and Kazakhstan, governments are likely to prefer large-scale agriculture in pursuit of self-sufficiency in food and agricultural exports growth.

The other aspect that attracts investments in large-scale farming is the economies of size (scale and scope). Given introduction of modern production technologies, large farms can get the expected returns much faster than small ones. In addition, large farms are often vertically integrated, thus economizing on transaction costs. Furthermore, the introduction of new technologies and professional management techniques help to monitor hired labor, design modern pay and compensation systems and so on, enabling lower transaction (monitoring) costs compared to small farms.

However, whether the large-scale farming is more efficient and profitable than the small or medium size farms remains an almost omnipresent question, occupying the minds of researchers, policymakers and practicing managers. This in turn raises questions about the sustainability of the large-scale mode of organization of agricultural production. Therefore, the LaScalA online platform opens up a series of articles, interviews and opinions on the current and future developments, drivers and effects of large-scale farming in different parts of the world. 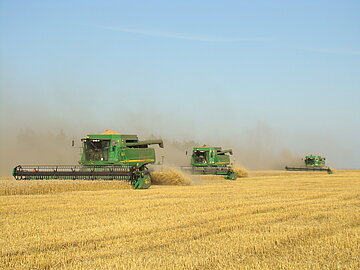