11 September 2017 - On 11 and 12 September 2017, the Leibniz Institute of Agricultural Development in Transition Economies (IAMO) in cooperation with the Association "Ukrainian Agribusiness Club" (UCAB) hosted the first meeting of the International Competence Center on Large-Scale Agriculture (LaScalA) in Kyiv, Ukraine.

The event was attended by more than 20 participants from research, business and NGOs from Argentina, Brazil, Czech Republic, Germany, Kazakhstan, the Netherlands, Romania and Ukraine. The experts and representatives of agroholdings, consulting companies and scientific institutions shared their knowledge about the development of large agro-enterprises in their countries. Firstly, the challenges and specific questions of the development of large agricultural enterprises in the individual countries were presented. The participants also discussed future research projects and cooperation opportunities.

According to the LaScalA project leader, Dr. Taras Gagalyuk, large agroholdings are one of the main forms of organization of agricultural production in Kazakhstan, Russia and Ukraine. Furthermore, they play an increasing role even in countries where the emergence of large holding structures was not possible until recently – Eastern Germany, Czech Republic, Poland, Lithuania, and Romania. Unfortunately, these trends are poorly covered in publicly available sources of information. For example, the Google Scholar search term "farm" produces 3 million results, whereas the term "agroholding" – only 1000 results. Large-scale agricultural production structures in developing countries receive much attention mostly in the context of land grabbing. At the same time, general public is not familiar with the issues such as organizational structure, management methods, efficiency and social responsibility of large farms as well as institutional preconditions for the development of large-scale agricultural production. Therefore, there is a need to investigate these issues in greater detail by expanding the range of existing research both thematically and geographically.

According to the study of the UCAB, which was presented during the meeting by the UCAB’s CEO, Taras Vysotsky, 21 Ukrainian agroholdings made initial public offerings (IPO) on international stock exchanges in 2005-2013.This allowed attracting $ 1.5 billion of additional investments, whereas the total capitalization of Ukrainian publicly listed agro-companies reached $ 6 billion at the best of times. Currently, only 13 agricultural holdings with operations in Ukraine are listed on international stock exchanges; their total value is about $ 3 billion. According to Vysotsky, the main factor that hinders the development of agricultural holdings in Ukraine is the absence of a land market. If the land in the country could be freely sold, the potential for growth of the profitability of agro-companies would be estimated at the level of 25%. Irrigation, "smart" cultivation technologies and investments in development would allow agroholdings to work more efficiently.

Foreign investors have been present for a long time in the Ukrainian agribusiness, despite persistent uncertainty in general and financial risks in particular. Alexander Gavrilyuk, Partner at KPMG Ukraine, noted that the main financial challenges for large agroholdings include liquidity management, currency risks, as well as the impact of the political situation and military operations in the East of the country. According to him, some agroholdings lost up to 70% of their asset value from 2013 to 2016, but last year the situation stabilized while many companies successfully restructured their debts.

Despite the fact that there are a lot of similarities with regard to the formation of agroholdings around the world, there are plenty of unique stories. According to Dauren Oshakbayev, representative of Kazakhstan, expert of the TALAP research center, there is almost no formal "holding" structure in the country. The reason behind this fact is that there is a special tax regime for agricultural producers in Kazakhstan, which is designed to prevent fraud with VAT and, therefore, it does not apply to holding structures. Subsidiary farms are thus formal partners of the parent company. At the same time, the problem of high indebtedness is severe in Kazakh farms. Oshakbayev named the state holding "Kazagro", which borrowed $ 2 billion abroad in 2014-2015. To repay the debt was more difficult than originally expected, especially on the background of a sharp devaluation of the local currency Tenge. The loan was more or less successfully restructured, achieving a rate cut from 21% to 14%.

Professor Oane Visser fromthe International Institute of Social Studies of Erasmus University Rotterdam in The Hague, who studies land relations and government communications in Russia, believes that vertical integration, agribusiness experience, management expertise, access to land resources, a successful location and climate for the production and marketing of products, as well as access to subsidized loans belong to the factors of successful development of large agroholdings. The lack of these factors will scare investors off.

According to Professor Vladislav Valentinov from IAMO and the Martin-Luther-University Halle-Wittenberg,  agroholdings are increasingly compelled to invest in social responsibility programs, filling the so-called "governance vacuum" in rural areas and solving the problems of both their own personnel and the rural communities. In this respect, agroholdings are increasingly similar to former collective and state farms, which were not only engaged in agricultural production, but also provided all kinds of services in the countryside.

A similar opinion was expressed by the Czech expert – representative of the Institute of Agricultural Economics and Information in Prague Dr.Ladislav Jelinek. According to him, the notion of large business is quite contradictory: in different countries this form of organization of agriculture has different scales in terms of land operated and amounts of livestock bred. The development of large-scale agribusiness in the Czech Republic is still significantly influenced by the view of the past. The policy of 1990 in the field of agriculture directly or indirectly contributed to the progressive development of large agricultural enterprises with large capital and land endowments. According to Jelinek, large agricultural holdings in the Czech Republic usually have thoroughbred cattle and a lot of arable land as well as show higher labor productivity efficiency than small farms.

The representative of Romania – Dragos Smedescu from the University of Agronomical Sciences and Veterinary Medicine in Bucharest – spoke about the specifics of the development of agribusiness in his country. He noted that 75% of the Romanian farms are only about 2 hectares in size. Nevertheless, the country is witnessing the emergence of a large-scale agricultural business, primarily due to the inflows of foreign investments.

The Director of the Agribusiness School at the University of Buenos Aires, Professor Sebastian Senesi, believes that, among other factors, potential investors are guided by the organizational structure of the business when choosing an object for investment. According to him, over the past 25 years Argentina has developed agribusiness through both the integration of companies and the diversification of their activities.

Sharing his experience with the audience, Professor Marcos Fava Neves at the FEARP Business School at the University of São Paulo in Brazil described five main risks that will affect the development of large agribusiness globally: political factors, economic development, use of natural resources, socio-cultural circumstances and dynamics of technology development. Within the framework of the LaScalA project it is further planned to hold thematic conferences, workshops and seminars that will contribute to in-depth understanding of problems faced and caused by large-scale agribusinesses around the world. 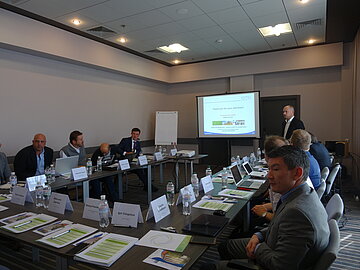